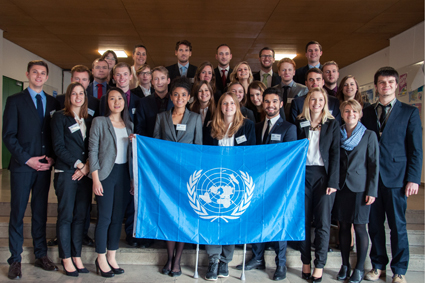 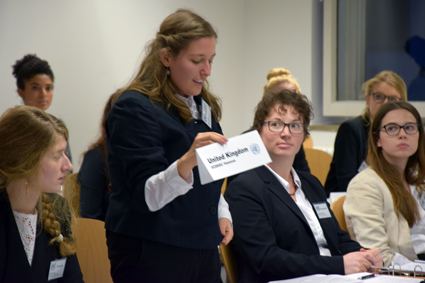 A special tutorial teaches students the ins and outs of rhetoric and negotiation… (Foto: Ivana Peric) 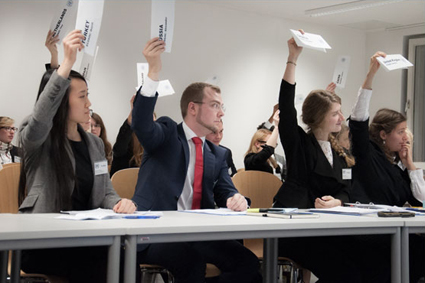 …and the rules of procedure during official sessions. (Foto: Martin Schunk)

Students immerse themselves in the world of diplomacy

Slipping into the role of a diplomat and debating current topics with nearly 5,000 participants at the UN headquarters in New York: The Model United Nations makes it possible. Since 2008, the BaMUN preparatory conference has been training the Bamberg delegation for the diplomatic spotlight.

The atmosphere is charged. Each of the 23 participants is clad according to the formal dress code; business suits all around. Tables feature names of countries in place of personal nameplates for the duration of the conference. “We start with the roll call,” begins the committee chairperson. One after another, he calls the names of the countries present before debate on the sequence of agenda points is opened. In short, the process is the same as that followed by the real UN diplomats.

The 23 participants are students from the universities of  Bamberg and Coburg who are slipping into the roles of United Nations delegates for the two-day simulation conference (BaMUN) held in Bamberg on the 4th and 5th of December. In the mock committees, the Security Council and in the Economic and Social Council, the agenda includes topics like suppression of terrorism in Africa as well as social and economic integration by way of sustainable urban development. The challenge lies in representing the viewpoint of each country as realistically as possible in order to negotiate compromises and ultimately adopt a resolution.

Beginning in 2008, the BaMUN has been a central factor in preparation for the National Model United Nations (NMUN), the world’s largest conference simulation which is held annually in New York. At the BaMUN conference, students in the Bamberg delegation learn skills that they can apply directly to the main event in New York.  “During our preparation in Bamberg, we not only receive an introduction into UN conference procedure, we also practice rhetorical skills, negotiation techniques and drafting resolutions in the  style of the UN,” explains Marlene Knörr, one of this year’s delegates and a master’s student in the European Economic Studies programme. In March of 2016, the Bamberg delegation will be representing Israel.

From Bamberg to New York

Beginning in 2003, the University of Bamberg has sent a delegation to New York each year. Nearly 5,000 participants spend five days discussing topics of a globally political significance, and the flair of the UN’s original location certainly heightens the experience. “If you’re lucky, you may even run into actual UN delegates. I met Ban Ki-moon there,” says Thomas Dörfler, Bamberg delegate from 2007 and research assistant at the Chair of International Relations. Speaking of her expectations for the event, Marlene Knörr adds, “NMUN is an amazing opportunity to personally experience a diplomat’s actual work. I’m really looking forward to intensive negotiation at the conference in New York!”

In order to help the students to represent the goals and interests of their assigned country successfully and as realistically as possible, the Chair of International Relations provides support for the project. A weekly, four-hour tutorial addresses topics like negotiating in English and rhetoric training. A weekly seminar provides advanced knowledge of the UN’s structure and policy fields. Visits to the assigned country’s embassy and to Germany’s foreign ministry round out the preparation phase.

Former delegates also play an important role in the fully student-organised project. Besides Thomas Dörfler, who heads the weekly seminar, Miriam Müller has for years been sharing her expertise with new participants. The Bamberg native studied in Bonn where she participated in that university’s NMUN delegation first as a student delegate, and later as a coordinator.

The preparation process is certainly quite intensive, but it also bears fruit. Thus far, the University of Bamberg’s delegations have won 27 awards, and 19 of these were conferred in the last two years. Indeed this year’s country assignment is based on this excellent reputation. “We submitted a reference list with 10 countries and received our first choice,” says Dörfler. This year’s delegation will work in teams of two to represent Israel in nine committees. Additionally, Bamberg was assigned two seats in the Security Council for Chile. Dörfler is proud to point out that this is a special privilege.This year, nearly 50 applications were submitted to the Bamberg MUN project. In the selection process, a particular focus is placed on applicants’ interdisciplinary interests and on a balanced distribution of male and female students. In addition to political science and management students, Bamberg’s delegation also includes students of English and American studies and computer science. Dörfler stresses the importance of a well-rounded team saying, “Marks aren’t the decisive factor, motivation is.”