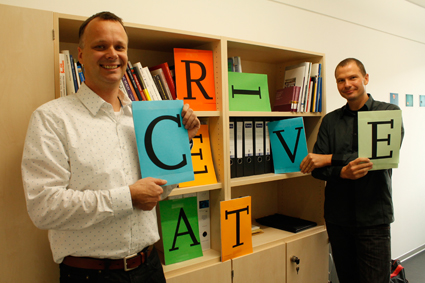 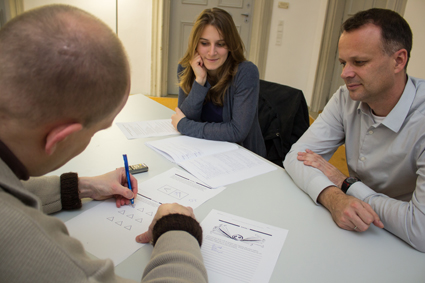 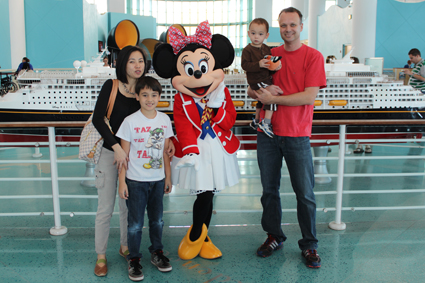 Winter in Bamberg rather than Disney World in Florida: The Güss family moved to the historic Franconian city for one year (Photo: private)

Economics, culture, education, social issues – in all realms of human life, creativity is essential to the advancement of society. It is therefore quite astonishing to the US-based psychologist Dominik Güss that transnational creativity research remains largely undiscovered territory. But now, with his is Marie Curie fellowship, he can contribute to filling in this research void.

Marie Curie is not only the Polish Nobel laureate in physics and chemistry, but she is also the scholar for which the EU’s leading mobility programme was named; the Marie Curie Fellowship. The programme is well-known among academics for its generous research grants, and also for its demanding guidelines for selection and award allocation. Accordingly, the level of competition for project funding is very high. International Incoming Fellowships are awarded to researchers from so-called “third countries” for a period of research work at a hosting institution in the EU or an “associated country.” In 2012, funding was awarded to only 13 percent of applicants. Prof. Dominik Güss has now become the first Bamberg alumnus to be able to return to the University of Bamberg as an International Incoming Fellow.

The idea for the current research project, “CREATIVE – Creativity Across Cultures,” came to Güss during a series of short research stays in Germany between 2009 and 2012. Those visits marked his first return to Bamberg since completing his doctorate and spending nine years at universities in the Philippines and the USA. In the meantime, Güss has been made a full professor of psychology at the University of Northern Florida in Jacksonville, USA. CREATIVE comprises three studies in which Dominik Güss is investigating and testing how family backgrounds and particular culture groups influence creativity in various countries. Study 1 has already been completed and is currently in the assessment phase. In this study, the psychologist is working with nearly 1,000 test participants from South Africa, India, America, Germany and Guatemala to investigate what classic creativity tests can tell us about the subjects’ real-life creative achievements. Study 2 utilises interviews to examine how artists from different countries create new works, how these new ideas are received, and how exactly the creative process works. Study 3 is based on the fictional, computer-simulated world of Moro in which German and American subjects must find solutions to various problems. This is meant to reveal the extent to which these tasks can be simplified by drawing on analogies. Güss hopes that the results of this project will be of use in the development of creative training programmes for school students, artists and multicultural teams.

“In Bamberg, everything just clicked”

The creativity researcher has found his ideal project partners at the University of Bamberg. These include the departments of Applied Computer Science/Cognitive Systems, General Psychology, Statistics and Econometrics, and of course his former Phd supervisor, Dietrich Dörner. And in addition, the Villa Concordia International Artists’ House is also involved as an external partner. Güss is clear about one thing: “In Bamberg, everything just clicked. These conditions would not have been possible in Jacksonville or any other city I know.”

The fact that Güss was already familiar with the University of Bamberg and was well acquainted with his future project partners and the research environment that he would be working in was, as he sees it, an important factor in the exceptionally positive appraisal of his proposal. At the same time, his extensive research experience abroad has made it possible to return to Bamberg with new input and a broader perspective.

As Güss and his wife would be granted an unpaid leave from their duties in Jacksonville, funding proved to be the critical aspect of project planning. Aside from management funds and research and travel grants, funding would also have to include a research stipend on which Güss and his family could live during their year-long stay in Bamberg. Having been unable to find suitable scholarships and sponsorship programmes on his own, he turned to Dr. Nicolas Giersig, coordinator of the Trimberg Research Academy (TRAc), for assistance. Giersig advised that Güss look into the Marie Curie fellowship programme. He was also able to provide ideal institutional integration in the form of independent TRAc projects: these make it possible for scholars to carry out their research projects as full university members who do not have to be institutionally affiliated with one particular department or institute.

Keeping strictly to research work allows for a tight schedule

Dominik Güss also found a further advantage in being affiliated with TRAc: Nicolas Giersig was able to provide assistance with the organisational side of his research period in Bamberg. This meant that he did not have to personally attend to things like locating a suitable office, setting up email accounts, obtaining computers and office materials or setting up a website. Precisely this kind of relief is essential to the success of the project, as one year is a tight schedule for an undertaking like CREATIVE, and an extension of the funding period by the Marie Curie programme is not foreseeable.