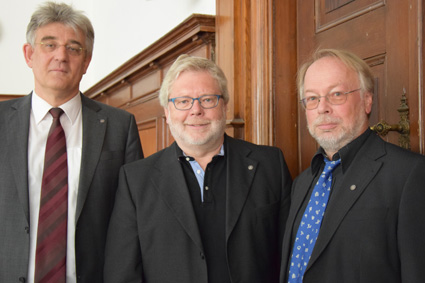 Vice Presidents Confirmed for Another Term in Office

Sebastian Kempgen and Guido Wirtz re-elected by a clear majority

As proposed by the university president, the vice presidents for teaching and learning, as well as for technology and innovation both sought re-election on June 6. In a public session, they each presented their goals to the University Council and were confirmed in office at the Council meeting that followed.

Receiving an overwhelming majority of the vote, Prof. Sebastian Kempgen and Prof. Guido Wirtz were elected to the vice-presidential positions for teaching and learning, and technology and innovation, respectively. Both vice presidents were pleased to be re-elected and are looking forward to pursuing their larger objectives in the term of office beginning on 1 October 2014.

Sebastian Kempgen, professor for Slavic language and literature, has been Vice President for teaching and learning since 2008. He will begin is third term in October and has indicated that his main focus as Vice President will be placed on system accreditation, internationalisation and continuing education. On the topic of accreditation, Kempgen points to the work of recent years, stating that a strong foundation has been laid for the realisation of full system accreditation between 2015 and 2016.

This focus on future development is also quite clear in Kempgen’s objectives for continuing and advanced education. Under the heading of lifelong learning, he hopes to contribute to the creation of sustainable structures for specialised postgraduate programmes, and for expert continuation modules and certificate courses. Kempgen is also committed to expanding the university’s internationalisation efforts beyond courses and programmes merely being taught in English. He would like to see the university place a stronger international focus on precisely the areas that make the University of Bamberg unique, and he is also committed to completing the modularisation of foreign language courses and to expanding the range of bachelor’s and master’s degrees to include the university’s teacher training programmes.

Expansive and advanced IT infrastructure

From 2011 to 2012, the computer science professor Guido Wirtz served as Vice President for research before moving into the then newly created technology and innovation position. An amendment to the university constitution had allowed for the expansion of the board of management to include a third vice-presidential position, a change that integrated matters of IT decision making directly into university governance.

“As Vice President, I’m looking forward to continuing the advancement and expansion of IT structures and comprehensive IT support for all research, teaching and administrative processes,” says Wirtz. A university-wide identity management system with single sign-on capabilities will form the basis for this system, and over the next three years, Wirtz also intends to create a research information system and continue development of a process framework for the most crucial areas of operation in teaching, research and administration and governance.

He is also focused on working with other regional universities to strengthen networks that will make mutual recognition of completed course modules, access to libraries and archives and cooperation with the Virtual University of Bavaria more efficient. The expansion of the TechnologieAllianzOberfranken (Technology Alliance of Upper Franconia) – a partnership between the universities of Bamberg, Bayreuth, Coburg and Hof, for which Wirtz is Bamberg’s regional coordinator – is a further goal for the coming years.

University President Godehard Ruppert has expressed his confidence about continuing his managerial collaboration with both of the re-elected Vice Presidents, stating, “The last three years have shown that expanding the board of management was the right decision. This new governance structure has allowed us to initiate crucial processes and ensure the continuity of their advancement and further development. The success of all universities that have managed to maintain a degree of continuity in times of change speaks for itself. Many look to the University of Bamberg’s progress as a prime example of this development. We look forward to working together to continue this progress.”

Please contact the press office with any questions or image requests by email or telephone at medien(at)uni-bamberg.de,or +49 (0)951-863-1023, respectively.