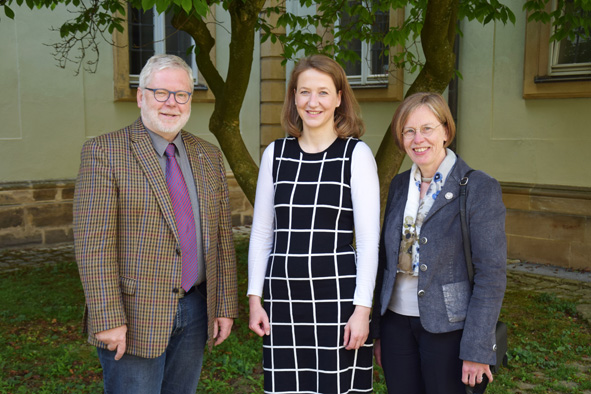 University President Godehard Ruppert with the new vice-president (centre) and the chairwoman of the university council Marianne Heimbach-Steins.

Maike Andresen is the new Vice-president for Research

On 22 May 2015, the university council elected Maike Andresen to the office of Vice-president for Research by an overwhelming majority. In addition to promoting international cooperation, she is committed to developing new career paths and initiating a system of human resource development. In office, she will be able to draw on insights from her own extensive research experience.

Beginning in the 2015/2016 winter semester, Prof. Maike Andresen, chair of Human Resource Management, will serve as the university’s Vice-president for Research. She was elected by the university council on 22 May 2015. Among other goals, she wishes to use her term in office as an opportunity to improve employment conditions for junior researchers and to promote the internationalisation of research ventures.

Open to the world

Andresen is herself a member of the “5C” association – a group in which researchers from six continents examine international career development – and she is currently conducting research on international employee mobility. “Of course working internationally is challenging!” admits Andresen, who has German and Danish roots, “But I have also personally experienced how enriching it is to work in and with other countries and their particular idiosyncrasies. It’s always possible to learn from good practices and ideas from around the world and to share your own experiences.”

She has already been able to apply her own experience to her work in the Audit “Internationalisation of Universities” project group. For Andresen, international orientation is important at every career level, from undergraduate studies all the way up to a professorship. “I would, for instance, like to support the recruitment of foreign scholars and to promote international joint research,” says the vice-president-elect. One important precondition of this kind of activity would be the cultivation of language skills by providing scholars with special courses on topics like academic writing.

As a professor who has been researching human resource management for over ten years, Andresen has a great deal of expertise and stimulus to offer. Approximately two years ago, the German Federal Education and Research Ministry’s “Expert Career – Career Development for Women and Men in Companies” project, for which Prof. Andresen served as an academic advisory council member, was completed. The project dealt with the question of how companies can endeavour to set up structures for expert careers in addition to classic careers in management. Over the course of Andresen’s work on the project, “It became clear that technical expertise was less highly regarded than managerial responsibility.” The promotion, for instance, of equivalent resources and equipment could serve as an expression of recognition. “This includes things ranging from equal travel and conference budgets to office furnishings, and even to equivalency in advanced career and development alternatives.”

Within the context of the current dialogue on academic career paths, Andresen would like to introduce new stimuli for a career development system at the University of Bamberg.  The term “academic career path” calls to mind the image of a single, straight road, but the reality is different. There is in fact a web of various paths that rise steeply in stages like doctoral studies, assistant research positions and assistant professorships, and which finally arrive at full professorships.

One of Andresen’s main proposals for combining and streamlining this web of paths is to create a regulated career development system for the University of Bamberg that would include three flexible and accessible career development models. These three paths would place an emphasis on technical expertise, increasing managerial responsibility and committee experience, and they would all maintain an equal measure of validity. “It’s the best way to cultivate differing personal skills and abilities,” says Andresen. “The paths that exist now have their own validity and merits – they just require a bit of reorganisation.” As the ongoing discussion on the continuation of the excellence initiative has shown, policy makers are increasingly calling for the creation of just such a human resource development concept.

Andresen’s interests, however, do not stop at the optimisation of existing structures; she also wants to break new ground. Despite all the structural challenges/obstacles, she remains confident: “A tenure system is a conceivable option for the University of Bamberg.” It would provide a perspective for a long-term employment after a period of gathering experience in temporary positions, and that in turn would provide a higher degree of security and would serve to minimise the risks associated with pursuing an academic career.

University President Prof. Godehard Ruppert was originally responsible for Andresen’s nomination. Beginning in October, she will serve as a member of the university’s board of management for a term of six semesters, succeeding Prof. Astrid Schütz whose term in office ends on 30 September. The president is looking forward to collaborating with the new vice-president and has expressed his satisfaction with her election, saying, “Maike Andresen is as amiable as she is tenacious, and she not content to settle for the status quo. She’s a person who seeks out both challenges and opportunities. That’s what makes her an ideal member of the university board of management, a body that finds itself permanently exposed to the opposing poles of sober realism and ambitious vision.”