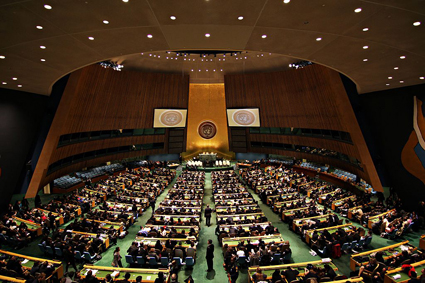 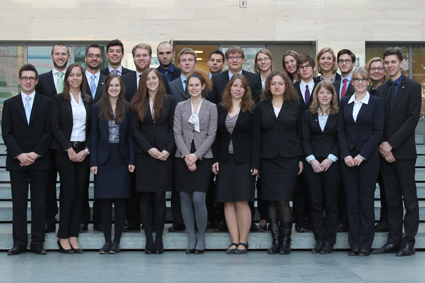 In 2014, the Bamberg NMUN delegation will represent the USA: the members visited the US Embassy in Berlin as part of their preparation. (photos: Friederike Kunkel) 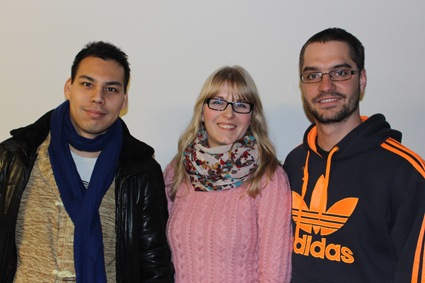 Cristian Graf, Cornelia Quader and Tobias Heid are convinced: participation in the NMUN brings with it both academic and personal rewards.

For the last 11 years, the University of Bamberg has sent a delegation of students to the National Model United Nations (NMUN) in New York. The current group officially kicked off their preparation in October 2013, and the delegates have been busy studying the history and procedures of the United Nations. And now they are entering the final phase: in April they will travel to New York to represent the diplomatic interests of the United States of America.

Below the large emblem featuring the globe and olive branches in The General Assembly Hall of the United Nations, in the room where representatives of the organisation’s 193 member states conduct the business of diplomacy, 20 students will take the international stage as part of a University of Bamberg delegation to the NMUN. The programme, which was started in 1946, annually affords over 5000 students from 150 universities around the world the opportunity to experience the work of the UN up close.

The University of Bamberg is no stranger to the programme: Under the patronage of Professor Thomas Gehring, chair of the department of International Relations, the university has been supporting student delegations since 2003. “Each group of student delegates represents the interests of one country,” explains Tobias Heid, the head of this year’s delegation.

In 2013, the Bamberg students were assigned the country of Morocco, and in prior years they represented countries like Guatemala, Bahrain and Nicaragua. “They were all countries on the smaller side, and ones that don’t hold much sway in the UN,” says Cornelia Quader, another participant. But that hasn’t stopped Bamberg’s delegations from standing out – quite to the contrary! Past delegations have received numerous awards for the strength of their position papers and their strategic negotiation skills.

Bamberg and Erfurt preparing to represent the USA

When it was announced that Bamberg, together with students from Erfurt, had been assigned to represent the USA, a country that in the past has almost seemed reserved for students from elite American universities, everyone was surprised. According to Bamberg participant Christian Graf, “That was something no one expected.” The delegation is both excided and a bit nervous about the influential role of their assigned country. “The USA is involved in almost every committee – all eyes are going to be on us,” Cornelia explains.

With this in mind, the students have committed themselves to intensive preparation. In addition to attending a project seminar on UN affairs, the group is also receiving speechmaking, negotiating and debating support from a team of tutors made up of University of Bamberg students who participated in the programme in past years. In December, in order to become better acquainted with the UN’s rules on negotiation, the delegation also took part in a small-scale simulation conference in which each individual student was responsible for representing the interests of a different country.

One thing that sets the Bamberg group apart is that each delegate is participating in the programme for the first time. Tobias explains: “At most universities there are students who take part every year.” And whereas some universities only select political science students, the University of Bamberg has left the programme open to interested students from all academic fields. Cornelia, for example, is a communication studies student, and students of psychology, economics and teaching are also involved. The main thing is that students are committed to the project – their marks and individual courses of study are secondary. As Tobias puts it, “NMUN is not only for the elites.”

Self-reliance is the key

Aside from the academic preparation, the other practicalities of the programme are left up to the participants. For example, Tobias organised a visit to the US embassy in Berlin for the group, Christian and Cornelia are responsible for press and public relations, and acquiring sponsorship is also up to the participants. In this way, the success of the delegation is truly dependent on the students’ commitment and self-reliance. But Tobias Christian and Cornelia agree: it’s all worth it. For the last few months, they have gained practical insights into world politics and have had the opportunity to try new things, test themselves and to grow closer as a team. And the ECTS points that they are earning don’t hurt either!

This press release was written by Andrea Lösel for the University of Bamberg’s press office. It may be used without restriction for journalistic purposes.