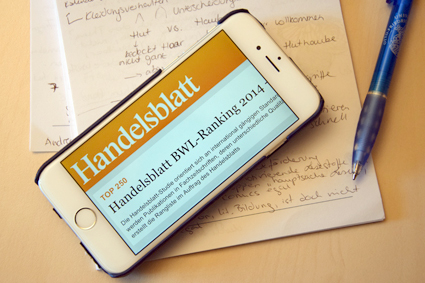 The Handelsblatt publishes rankings of the top researchers in business and management. 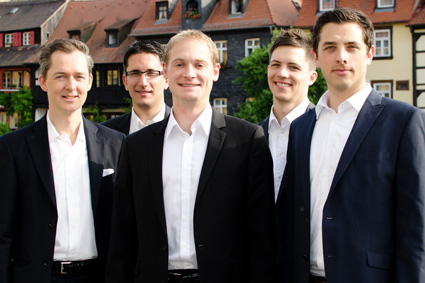 Tim Weitzel (left) und Sven Laumer (2nd from left, rear) are working together with the CHRIS-Team to conduct research on human resource management. 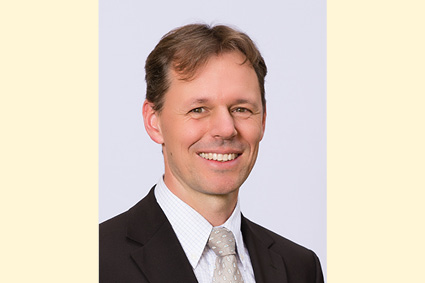 Björn Ivens has focused his research on the sociological and psychological phenomena of business relationships.

Three scholars from the University of Bamberg are included in the current Handelsblatt list of the top business economists. Their research on business relationships between corporations and on human resource management has brought them top honours in the renowned rankings.

The University of Bamberg’s information systems specialists Professor Tim Weitzel and Dr. Sven Laumer are well known for their analyses of recruiting trends. How do corporations recruit future employees? How do applicants find the right job? And what role does the internet play in these processes? These are the questions that these scholars are attempting to answer with their empirical studies on topics like “Recruiting Trends.” Additionally, they have also placed a focus on the theoretical aspects of this research: “We are examining what drives the use of information technology and also what consequences it brings,” explains Tim Weitzel. Departmental research assistant Sven Laumer expands on the approach, saying, “We want to explain why people use – or do not use – information technology and whether this causes stress or an increased sense of wellbeing.”

Several of their articles concerning these theoretical issues have appeared in renowned journals, and now the two scholars have been listed among the top researchers in the 2014 Handelsblatt rankings. Tim Weitzel, who is the chair of the Department of Information Systems and Services, appears no less than twice in the ranking lists: he is ranked 86th in the “Top 100 Research Achievements” category, and in the “Lifetime Achievement” category, he is ranked 107th out of a total of 250 researchers. His research assistant Sven Laumer occupies the 59th place in the rankings of the “Top 100 Researchers under 40.” In its ranking process, the Handelsblatt considers well over 2000 German-speaking researchers from both national and international universities.

The Handelsblatt published its first rankings of top research-oriented economists nine years ago. Since 2009, the journal has also been publishing a biyearly list of prolific economists with the highest-quality publications. Each of the surveyed economists receives points for papers published in the more than 760 journals considered for the rankings. The more prestigious and influential the periodical, the greater the value of points awarded. It is important to note that rankings also consider scholars conducting their research at non business administration institutions and who nonetheless publish their work in the specialist journals familiar to the field’s international research community – like Tim Weitzel and Sven Laumer, who specialise in information systems.

Success, thanks to the culture of publication

The Bamberg researcher and chair of the University’s marketing department Dr. Björn Ivens is also listed in the “Lifetime Achievement” rankings. He has focused his research on enterprises’ business relationships with private and corporate clients, and has placed a particular emphasis on sociological and psychological phenomena. “I have determined that in cases of conflict, corporations only rarely hold fast to the stipulations of their contracts and take legal action against their business partners,” says Ivens. “Instead, success is dictated by standards like flexibility in professional dealings and the responsible exertion of power.” This serves an interest in maintaining long-term business relations. Professor Ivens is pleased to be included in the rankings, especially considering his considerable teaching responsibilities. He notes that “the particularly large number of new students that entered our programme due to the double Abitur class [caused by secondary school reform] didn’t exactly make it easy for us. There wasn’t always as much time left for research as I would have liked.”

In addition to rank, there is more that can be read from the listings. How many Handelsblatt points does an individual researcher have per year? And how old is he or she? Considering this information, you can discover that, at 31 years of age, Sven Laumer is the second youngest among the “Researchers under 40.” At the same time, he has the third highest number of points per year, meaning that the young scholar has had a comparatively large number of papers published in the relevant publications. Laumer credits his excellent ranking to his department’s academic culture, stating, “A great deal of our work is done in a team, and that means that there’s a lot of reciprocal support and enrichment.” The large body of collaborative, jointly published work is evidence of this, and Laumer confirms that “There is a strong culture of publication in our department.” It is particularly important that the departmental colleagues not merely conduct research, but that they also share their findings with the academic community in the form of published papers. “In this way, even doctoral candidates can quickly receive feedback from a broad pool of reviewers. This increases the quality of their research, and the result is dissertations and doctorates of the highest quality.”