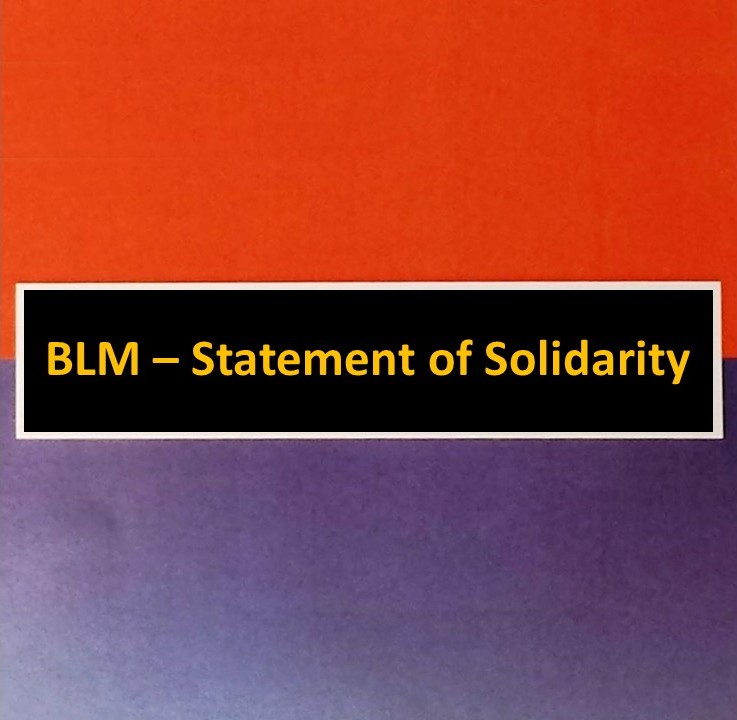 The American Studies section of Bamberg University fully supports and strongly agrees with the following statements by the German Association of American Studies, the Diversity Roundtable of the GAAS, the Postgraduate Forum of the GAAS, and the Bavarian America Academy.

"The German Association for American Studies (GAAS) stands with those protesting against the long history and systemic presence of racist violence in the United States and other countries. We consider it a basic civil right and an urgent civic necessity to publicly condemn and mourn the killing of Black people at the hands of the police. Protests against such and similar forms of violence are the political and cultural backbone of any democracy that is worth its name. We express our solidarity with all victims of racist aggression in the US and elsewhere, including Germany; we support the demands of #BlackLivesMatter; and we urge governments to respond to the current worldwide protests by taking strong measures against racism in the name of democratic civil society. As an academic organization, we will, in our research, teaching, and institutional interactions, continue to oppose racism and we are committed to critically confront – and implement measures in order to address – our own organization’s involvement in maintaining these structures."

The Members of the GAAS Executive and Advisory Boards

"We, the speakers of the Diversity Roundtable of the German Association for American Studies, want to take this moment to publicly condemn the recent wave of white supremacist violence and the ongoing systemic racism in the United States as well as in Germany. We want to express our condolences to the victims’ loved ones, and to affirm our support for liberation movements such as Black Lives Matter, at home and abroad.

Scholars like Patricia Hill Collins remind us of the necessity to always speak out against racist violence. Its pervasiveness can be overwhelming and produce silence by which such violence, in turn, can become neglected, invisible, and implicitly legitimated over time in hegemonic discourse (Hill Collins, “It’s All in the Family: Intersections of Race, Gender, and Nation” 66).

At the same time, we heed Sara Ahmed’s warning that mere declarations of anti-racist commitment and solidarity are not necessarily performative speech acts that translate into concrete actions or effects in and beyond our research and institutional lives (Ahmed, “Declarations of Whiteness”). What opportunities for individual and collective anti-racist action does this moment of global protest present? We urge you to consider actions such as donating to organizations that are actively combatting anti-Black violence in the United States and in Germany. We are also grateful to receive your ideas on further modes of support and public intervention that we can undertake as members of the Diversity Roundtable and the larger German Association for American Studies.

As academics from a wide range of scholarly traditions within American Studies, we have versatile capacities to unearth intersecting oppressive structures such as sexism, racism, ableism, and anti-queerness. We would like to encourage one another to acknowledge that there are many ways to oppose anti-Blackness."

(Source: Website of the Diversity Roundtable of the GAAS)

"The current representatives of the Postgraduate Forum (PGF) of the German Association for American Studies (GAAS) want to take this moment to address the present situation in the United States. Not only have the ongoing circumstances of the Corona crisis been fatally affecting black communities by at least three times the rate of white individuals (APM Research Lab) due to systemic disparities and racist ideologies, acts of law enforcement before and during these troubling times have also led to the violent killings of George Floyd, Breonna Taylor, and many other black individuals as well as the arrests, injuries, and deaths of protesters calling for the stop of this very brutality at the heart of a white supremacist system that does not value black lives.

We want to wholeheartedly denounce these anti-black sentiments and violent forms of systemic racism in the United States—and everywhere in the world. We are outraged by the ways members of the federal government, especially the current American president, are failing to recognize their responsibilities for these criminal actions and are instead assigning blame to those challenging the status quo and standing up in the name of justice. We explicitly oppose the use of military equipment to control demonstrations as well as the threat to deploy U.S. troops to “dominate” protesters. We urge the authorities to act in defense of human rights by listening and responding to collective calls for reform instead of further marginalizing and oppressing already vulnerable communities.

In this respect, we want to express our support of liberation movements such as Black Lives Matter, including the innumerable global anti-racism efforts in the streets and online in the name of #nojusticenopeace. We offer our deepest condolences to the victims and their families, whose lives we continue to hold in the highest regards.

As scholars in the multidisciplinary field of American studies, we believe it is our duty to engage in decolonizing work in our research, our classrooms, and in the conversations we have with each other and with individuals outside of academia. We want to commit to dismantling supremacist systems by following prompts to amplify BIPOC voices, to read across intersections, to diversify our syllabi, to check our privileges, to speak up against injustice where we see it, and to take care of ourselves and others who need our help in times of adversity.

We believe that statements to support black lives must be accompanied by concrete actions. We thus want to give you the opportunity to sign your names below this letter in support of the BLM movement on a larger scale and of our letter specifically. You can do so through the following link: https://pgf2019.wordpress.com/in-solidarity-with-blacklivesmatter-an-open-letter/. We believe this is a fundamental measure signaling not only our collective solidarity with the victims of racial violence, police brutality, and white supremacy but also our commitment to contributing to a safe, sensitive, and supportive PGF environment that strives to #leavenoonebehind and thus backs, especially, colleagues and friends of color. This is also the kind of environment we want to help create for the GAAS at large.

We also want to offer an interactive platform featuring a variety of ways we can support causes and initiatives surrounding the Black Lives Matter movement and beyond. We ask for your help in collecting and sharing any resources and/or to add new categories and items where you see fit. We hope to encourage your support in whichever way is possible for you in the present moment, taking into consideration that current insecurities surrounding COVID-19, racism-induced injustices, and other hardships affecting many of us in Germany as well as other parts of Europe and the world, too. You can access the list of resources here: https://docs.google.com/document/d/1DZefKFGsfgo1HiJmxZh_K2PzCR1a8dnQYIw-y9sFGd8/edit?usp=sharing

Last but not least, we also also want to express our support of the initiatives taken by the Diversity Roundtable of the GAAS, whose position statement you can access here: https://dgfa.de/diversity-roundtable/.

We thank you all for your ongoing efforts as researchers, teachers, protesters, activists, and, especially, supporters of the PGF network, which will surely engender many more discussions on these topics in the years to come. Together we stand."

(Source: Website of the Postgraduate Forum of the GAAS)

“We are acutely aware of how anti-Blackness, white supremacy, and racialized/racist violence are systematic and of how they are woven into the fabric of U.S. history, society, and culture. We condemn the brutal destruction of black lives, such as the recent police killings of George Floyd, Breonna Taylor, and Tony McDade and stand in solidarity with everyone opposing racism, discrimination, and injustice. Acknowledging our own academic privilege, we commit to increase our efforts of educational and scholarly projects that critically study racialized violence and systematic racism in the United States and elsewhere, including our own fields and institutions.

Board of Directors, Bavarian America Academy